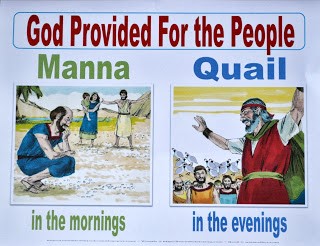 The Israelites have been rescued from slavery in Egypt. God let them pass through the Red Sea on dry land with a wall of sea on either side. And now they are in the wilderness and they are beginning to moan. Listen to their story…
https://www.youtube.com/watch?v=Ki84LIbqsdI
When you take a long trip, where do you get food to eat? Usually you stop at a restaurant and buy some. Or sometimes you pack your lunch in a picnic and take it along. The Israelites were on a really long trip. Where were they going to get food? They couldn't carry enough to last them. They didn't stay any place long enough to grow any. There were no stores to stop at. And they numbered a million or more people. That's a lot to feed.

God’s people were on a journey to a land they would call their very own. God promised them that they would have their own land so this became known to as “The Land of Promise” or the “Promised Land”.
To get to their new home the people had to walk many miles across a desert. After a few days of travel the people were very thirsty. The only water they found tasted so bitter that they could not even drink it.
God continued to take care of his people on their journey. During the day God placed a pillar (or tower) of cloud in front of them so they would know the correct way to go Even though they were in a desert he led them to other places where there was plenty of water to drink.
They were led by a pillar of cloud in the day…
And a pillar of fire by night…
After more than a month the people of God arrived in a place called the “Desert of Sin” and made camp. Soon all of the food was gone and the people began to doubt that God could take care of them. They complained to Moses and his brother Aaron. Sadly, they even told Moses that their lives were better back in Egypt where they had been slaves. They said Egypt was better than the desert.
But God never forgot his people. God told Moses that food was about to rain down out of heaven. As Moses and the people looked out into the desert they saw a big cloud. They knew that the glory of God was in the cloud.
And God did just as he said. Every evening a great flock of quail (birds) would fly into the camp. The people would gather them and eat them. And in the morning, when the people woke up, little white flakes (like wafers) covered the ground. The people called this manna.
Each day they gathered the manna and took it home to make bread. But God told the people to only gather enough manna to feed their family. God wanted them to do exactly as he said and remember that he would take care of them.
But some of the people did not listen. They were greedy and gathered more than God had told them to. They thought they could save some for later. This seemed like a good idea at first but then they noticed that the extra manna began to rot and stink. Soon the manna was full of worms. These people realized that they should have listened to God.
There was another way God wanted the people to remember him. He told the people that the seventh day of the week would be a day of rest. They were to stop working on this day and make it special. This was a holy day set aside for God and it was to be called the Sabbath Day.
There would be no manna on the ground on the Sabbath day. Instead, God told the people to gather extra manna the day before the Sabbath and to prepare bread and save it to eat on the Sabbath. Unlike the other days the extra manna did not rot and fill with worms.
Now it is time for our song….I reach up high-get ready!
Quiz time…
True or False (answers at the end)
1. God didn't realize the Israelites needed food until they complained.
2. God showed his love to the Israelites every day by sending food.
3. God sent the manna already cooked and ready to eat.
4. The manna could be prepared several ways.
5. God requires us to provide everything we need.
Craft activity
Make a balloon quail.

What you will need:
Orange, Brown or Tan Balloons
Orange, Brown or Tan Paper
Markers
Sellotape
What to do:
1. Before class prepare some balloons to look like quail. (Make sure you make at least one per child.)
2. Draw faces on the balloon with a black permanent marker and tape or glue on wings cut from construction paper.
Play Catch Quail Game
Put a paper plate or bowl onto a paint-stick and put the balloon bird onto it.
Then try getting the bird to the other side of the room without it falling off. If you do not have a paper plate or dish, you could try carrying it on your head (much more difficult).
If you are in a family, you could do this as a race…
Answers to quiz
1. False 2. True. 3. False. 4. True. 5. False
Puzzle wordsearch online at -can you do this interactive puzzle
https://thewordsearch.com/puzzle/1442298/

Popular posts from this blog

As we've now gone online for all our services, I'm trying out this as a blog. So if you follow down the page here we should share the service as if we were all together in our building!
All the music and videos are links- so when we get to that part, click and listen to the readings and songs!


We're looking at the story of Ruth - a little book tucked in after Judges and before Kings in the Old Testament. Many people celebrate Mothering Sunday today but I'd like to look at people who weren't related that closely, came from different countries and peoples but still took care of each other and found that God was faithful to them.

Let's gather together this Sunday at 10.30 am worship!

Welcome to our ServiceThe Story of Ruth: Faithfulness Rises From Tragedy.We meet in the name of the Father and the Son and the Holy Spirit
Amen

Shout it out loud! Alleluia! Christ is Risen Alleluia! He is Risen indeed

We meet in the name of the Father, and the Son and the Holy Spirit Amen
Song: Thine be the Gloryhttps://www.youtube.com/watch?v=RbBOOmkMLmI
Almighty God, to whom all hearts are open, all desires known, and from whom no secrets are hidden: cleanse the thoughts of our hearts by the inspiration of your Holy Spirit, that we may perfectly love you, and worthily magnify your holy name; through Christ our Lord. Amen.
We’re going to celebrate the Easter story today- in a different way. We’re going to use colours to remind us of the steps we’ve taken to get to this day. You could try and find all these different colours at home as we go along…
Our first colour is GREEN– we remember Jesus riding into Jerusalem on a donkey- and how all the crowds cheered and waved their palm branches. They celebrate him as a hero. How they loved him!